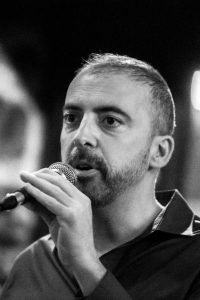 Finding Connection in the Montreal Jazz Scene
By: Erika Serodio

Fuat Tuaç was waiting at the bar when I arrived at Café Parvis. “I usually go to places like this,” he tells me a few minutes later. He motions around the room as if his hands could fill the space with sound. He tells me that he often enquires with staff members at the local eateries he visits, “Is there live music on any night? Would you like some? Would you like jazz? Wouldn’t it be nice? And I convince them.

Fuat’s entrepreneurial spirit comes as no surprise. Before pursuing jazz full-time, he worked as a corporate lawyer in Turkey. Fuat recognizes both the importance and the difficulty of marketing yourself as a musician in Montreal. “That’s where most of the musicians fail actually, even myself,” he explains. “You called the bar one time, twice, three times. You stop by – they don’t have time. Rejection, rejection, rejection. We have to deal with that. And sometimes, I see frustration in my colleagues, which is something I constantly battle as well because the market is not so big.”

And yet, despite these challenges, Fuat says “it’s the Montreal live music scene that I find so inspiring.” When asked to describe his inspirations, Fuat returned to the people around him: “I must say most of my colleagues are my inspiration. Because we’re so lucky. Any given day we can go out. And just like in New York, you can go to a live venue – it doesn’t need to be jazz… There’s just amazing music.”

Fuat is a jazz vocalist who enjoys singing many different styles of jazz. “I think that as a musician, and as a person as well, you have to be open. You cannot say I can’t do that, because that kills your inspiration.” He understands that jazz music is not approachable for everyone, but he’s thinking about ways that he can incorporate new sounds into his music. “You can go eclectic… Why not mix the genres of music and make something new, fresh?” Fuat has been thinking about how “even the noise of the city sounds like hip-hop.” At the moment, he’s considering shaping his story as an immigrant into urban poetry and to use instrumentals that combine hip-hop, jazz, and eastern influences. On his upcoming album, he’s looking to collaborate with other immigrants and musicians who have mastered Middle Eastern instruments.

Fuat has never been a fan of what he calls “the elite hashtag on jazz.” He discovered jazz later in his life, a theme he explores on his first album, Late Bloomer. The improvisational aspect of jazz intrigued Fuat, who appreciates the ability to reinvent a song each time he is on stage. The encouragement that he received from his teachers and the welcoming disposition of the local jazz community also drew him in.

Fuat’s passion for jazz is deeply entwined with his desire to bring people together. When he attends a dinner or a house party, he says “I always ask – Can I bring a friend?” Sometimes they say no, but Fuat is not defeated by this. “In our culture, in Turkish culture, you mix your friends. Whereas I realize here in Montreal people seem to not blend so much.” But he continues to hold this Turkish value close, nourishing it with his music. “I find it so fascinating and inspiring, actually. The interaction. And I think that there must be more interactions between the immigrants and the Quebecois living here.” Fuat feels that there are open-minded people in Quebec, “especially in the music world… People are curious about different cultures.” Through his music, Fuat aims to encourage people to be open to new sounds and to be curious about other cultures – music as a catalyst for change.

As Fuat begins work on his next album, he turns to themes that have deeply influenced his life. “Immigration, living in Montreal, the realities, I’d like to derive from the realities of being an immigrant and the reality of being a real Quebecois.” When asked about including political and social themes like immigration and belonging into his music, Fuat’s response is candid: “I guess when you’re an immigrant you have no choice… you have to.”