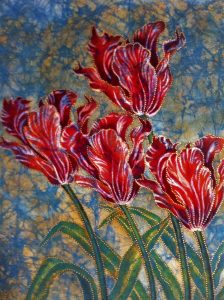 The table before us starts out perfectly vacant. As she speaks, Avy Loftus pulls out one piece of fabric after another, seamlessly weaving together the histories, struggles, politics and passions that have contributed to her body of work. It’s not long before detailed fabrics and vibrant stories are spilling over the sides of the table. “There are so many philosophical meanings behind one piece,” she tells me.

Avy first learned about batik when she was a young girl growing up in Indonesia. She was taught the technique by her Indonesian grandmother, and the art practice remained in her life as a medium for connecting to her heritage. In her early twenties, she realized that the younger generations in Indonesia were losing touch with this part of their heritage. Avy found herself explaining the regional origins of the pieces – Surakarta, Solo, Yogyakarta ­in central Java, where the art of batik is highly developed. “The colour itself is different from one city to the other city, and the cut, from left to right, or right to left, you know this is from different cities.” Avy says that most young people “only know how to wear it, they don’t really know the meaning behind the piece.” This realization spurred Avy into considering batik as a topic for education.

At that point, Avy was a young university graduate in Indonesia, working in business administration. She studied language, arts, and education for her bachelor degree, but speaking several languages made her valuable in the business sector. Language and the arts were elements of her job, but she says, “I really wanted to touch the art side of the work.” She describes coming to Canada as an “opportunity to go away from the business world.” She continues to make traditional batik artwork – some inspired by the geography of her current home in Quebec. “I’m living in Quebec now – I put the iris as the Quebec local flower, into the artwork. The flowers, as a batik artist, we adapt with the flora and fauna that we live in now.”

Throughout her career, Avy has rooted her batik in symbols and messages that she holds close to her heart, and has used her art as a mechanism for change. Her intent is to “not only create things; I would like to create something that could be useful. To have a meaning behind whatever I’m doing.” Ten years ago, Avy discovered that her daughter was being bullied in school. Concerned but also empathetic, Avy decided to channel her artistic energy into a benevolent mission: combat bullying in schools.

Her anti-bullying project, titled Peace, Love, and Hope, has recently celebrated its tenth anniversary. Avy describes the project as “a healing process in many ways.”

The message of non-violence behind the Peace, Love, and Hope project is deliberately local and contemporary and yet its reach has effortlessly transcended borders. It began in her own child’s school, but has since traveled through North America, Europe, and South Asia with over 150,000 child participants. She tells the children in her workshops “even though you cannot travel now, at such a young age, imagine your work is going to travel around the world with me. Just imagine that your positive words impact other kids in the world, in other provinces, other countries.” She encourages them to think globally, “but you act locally.” Avy always starts her workshops by gathering everyone in a circle. Then she says, “Tell your friends, beside you, just one or two words – the positive things that you like about them.” She asks the children to find inspiration for their work from positive things – to work on the three themes of peace, love, and hope. “Then I give them totally white cloth. Totally white, just imagine that.” Each of the students creates a small square batik masterpiece, which Avy brings together in quilts. These quilts have been displayed at museums, cultural centres, and schools around the world.

Grant Deadlines – May 2018
Scroll to top