This is the first story of a new ELAN series, “Lessons Learned”. In this series, we will be highlighting insights of key stakeholders in our ELAN Artists Community Education (ACE) Initiative project on facets of the projects they are engaged in. This story was written when Louise Campbell was in Grosse Ile. 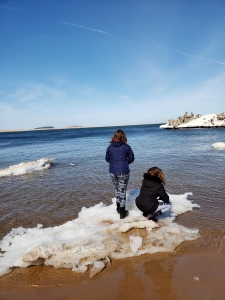 When Musician and Participatory Arts Facilitator Louise Campbell first arrived in Grosse Ile for an artist residency supported by both ELAN Quebec’s ACE Initiative and the Culture in the Schools program in the Magdalen Islands, she used music to introduce herself to the community. Campbell grew up in Southern Alberta, and she says that there were many similarities between both locales, namely the big skies and wind. Contrasting her experience in Southern Alberta with her current hometown of Montreal, she improvised music to help the students of the Grosse Île School and community understand and relate to her background and the idea of making music and art inspired by place.

Throughout her project, Campbell maintained the theme of connecting to place through improvised sound and colour in order to help the students deepen their understandings of their community. She writes that the people of Grosse Ile, “have a very strong sense of place; working through sound can highlight this and give [the residents] a way in to making music based on their own experiences”.

Stories emerged out of the brainstorming sessions that Campbell partook in with the students of Grosse Ile School. Many of these stories centered on the sea, from students’ favourite memories of time spent with friends and family at the beach, to tragedies evolving out of the reality of living in such close relationship to the ocean.

Such maritime tragedy is part of the lived and mythic experience of the Island; known as the “Island of a Thousand Shipwrecks”, community members have recently opened an exhibit called “People of the Sea” that remembers and commemorates the lives of those lost at sea.

Louise and the students of the Grosse Ile School developed short narratives that delve into the range of experiences the students associate with their home through the medium of radio play. To better express the narratives, they began to build up a repository of sounds, a sound library, using Foley-style sound effects, boom whackers, loop pedals and sounds recorded in the natural environment. 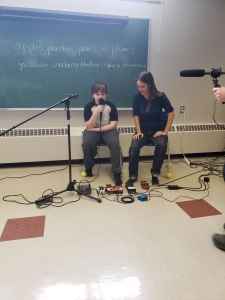 During her residency, Louise also developed a special educator-student relationship with a young student with extreme sensitivity to sound. Similar to empowering the students to articulate the natural environment in clearer ways through sound and narrative, Louise helped the student understand and appreciate his sonic environment more through developing ways with him to first manage, and then play within his experience of everyday sounds.

Louise recalled first arriving and playing clarinet for a class, and having the student react very strongly and negatively to her music and sound in general. Following this class, Louise showed the student how to use an equalizer on his computer to neutralize sound to adjust the balance of specific frequencies, in the hopes that he would be able to adjust the sound so that it would be more comfortable for his hearing. Louise states that “once I had done this, in ten minutes, he went from being quite mad to being very content and started having a lot of fun playing with sound”.

With consent from his teacher, Louise invited the student to take a break from his classroom when he was done with his schoolwork to help with the recording of sounds for the sound library. She recalls that the first time that she first gave the student this responsibility, “I heard him stomping around and slamming a door and running water; creating all these sound effects”.

Since then, the student has started to mix sounds effects to create music, including a short piece featuring the sounds of a wind storm and another of a train leaving the station. He has also thrown himself into pitch and rhythm games using boomwhackers, showing exceptional aptitude and taking great pleasure in playing these games alone and with others. Louise reflects on the importance that creating a positive association to sound for one student can have on the community at large, saying that this student, “has been a huge part of my experience here, and is one of the ways in which I think I am really creating an impact through my project. In such a small school, one kid affects so many others. If I can have him understand sound as fun and interesting, it may help him develop important coping strategies to deal with this acute sense of hearing”.

Before leaving Grosse Ile, Louise has been teaching as many people as possible how to help the young student equalize, edit and mix sound with software downloaded onto his computer, as well as play pitch and rhythm games using boomwhackers. She hopes that this, and the momentum built up around contributing and using the sound library to create both music and stories, will encourage the students of Grosse Ile to experiment with sound in order to understand themselves and their environment in deeper ways after her residency ends.

Louise states that she believes that creative approaches to learning are essential to help diverse peoples integrate into schools. She also believes that creativity helps people process their life experiences. Through helping the student with sound sensitivity relate to sound in both more manageable and healthy ways, Louise is helping him be and feel more in control and successful now, which will help him later in life. In helping the students of Grosse Ile understand their environment better through sound, Louise is encouraging healthier relations to the natural environment. Both facets of her project encourage more complex relational learning through the sound. The skills developed through recording and mixing sounds will hopefully serve as catalysts for deepening learning of sound, to create stories that help both locals and newcomers relate to the realities of Grosse Ile into the future. 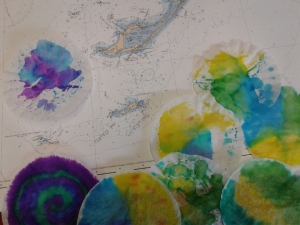