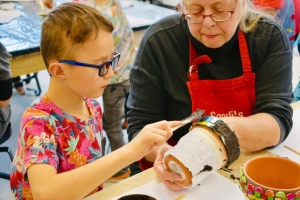 Lisan Chng, of MosaicJam International, says that for her, the community atmosphere and self-confidence that grow out of facilitating artistic practices are just as important as the creative practice of mosaic-making itself. Community-building was a core aspect of the project that she organized for Metis Beach School, which received funding and support from ELAN Quebec’s ACE Initiative, to encourage those of different generations and linguistic backgrounds to learn from each other in her Magic Pots and Talking Mirrors project.

In the project, Lisan first gave mosaic workshops to local seniors of the community so that they could make mosaic mirrors. The seniors then shared the skills they gained in making the mirrors with the students of Metis Beach School by teaching them how to grout and tile pots. Throughout the process, Lisan relays, both the students and seniors gained self-confidence through developing ingenious ways to make the art, which they then shared with the other members of the group. An example of such an occurrence was when a student with autism proved that she had a natural knack for mosaic setting and demonstrated her ability to other students and adults. Such multidirectional learning, which encourages a community atmosphere and the development self-confidence, is a core tenet of the ELAN ACE Initiative’s project model. 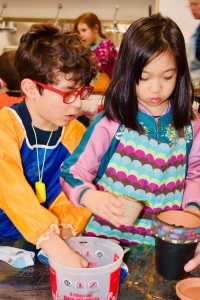 Another way in which multidirectional learning was introduced in Lisan’s project was through bringing in a student-journalist, Melissa Landry, to document the project. Lisan states that, “with Melissa onboard, I was able to completely focus on the workshops without having to think of capturing photos of moments at the same time. Having someone independently writing about the project really makes this project special for me. ACE Consultant Paula Knowle’s idea of presenting a timeline of the project with photos and comments from the participants was also a valuable idea. It helped me to communicate the story of what we are doing to everyone in school, and also to all participants. These are ideas I can implement in future projects as well.”

By welcoming a student-journalist into the project, Lisan increased the intergenerational connection that she values in her projects and encouraged multidirectional learning; she herself realized the benefit of welcoming someone into the project with communications expertise to relieve herself of the task, and of the importance of documenting and sharing content to broadcast the impact of the project to broader communities. 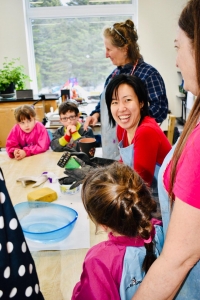 Melissa Landry, meanwhile, was able to develop her journalism, documentation and curation skills. Melissa states that: “this opportunity gave me a solid introduction into what journalism entails and provided for me a safe place to try it out for my first time. And because it was intergenerational, I got to work with both children and seniors which I believe doubled the value of this experience. Learning in this environment helped to sharpen the multitasking skills required in the documenting process between taking pictures, logging writing ideas, and washing little hands”.

Melissa Landry’s mother, Andrea Landry, also reflects on how the project developed her daughter’s self-confidence and her ease in working in diverse environments. She writes that, “from the moment we entered the beautiful Metis Beach School cafeteria, I knew the “Magic Pots and Talking Mirrors” project was going to be magical for us. Most interestingly for Melissa. As the workshop progressed, I could see that taking part with the lovely seniors and adorable children had invigorated her. Just as mirrors reflect us and plants bloom when they are planted in pots, I was grateful to see her grow from this experience.”

Inviting a student-journalist into her project benefitted Lisan’s goal of promoting the growth of intergenerational community and self-confidence, extended the multidirectional learning already present in the project through having Lisan further learn and benefit from Melissa’s counsel and skills, enabled Melissa further hone in on these skills, and ensured that the successes and moments of reflection of the project were well-documented and shared. Similar benefits can be gained in other ACE Initiative projects that invite-in student-journalists to document their progress. 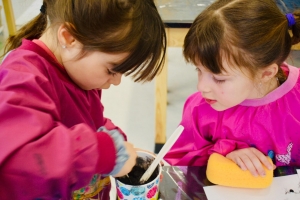