ELAN staff Camille Horrocks-Denis sat down with Kim-Sanh Châu and Miriam Ginestier, co-directors of Studio 303. Miriam Ginestier has been involved with Studio 303 since 1990 whereas Kim-Sanh Châu joined the team in 2013, and became co-director in 2018. Ginestier is a former dancer and queer event organiser. Châu is in the process of completing her Master’s degree in Dance at UQAM. She also works as an independent choreographer and videographer. 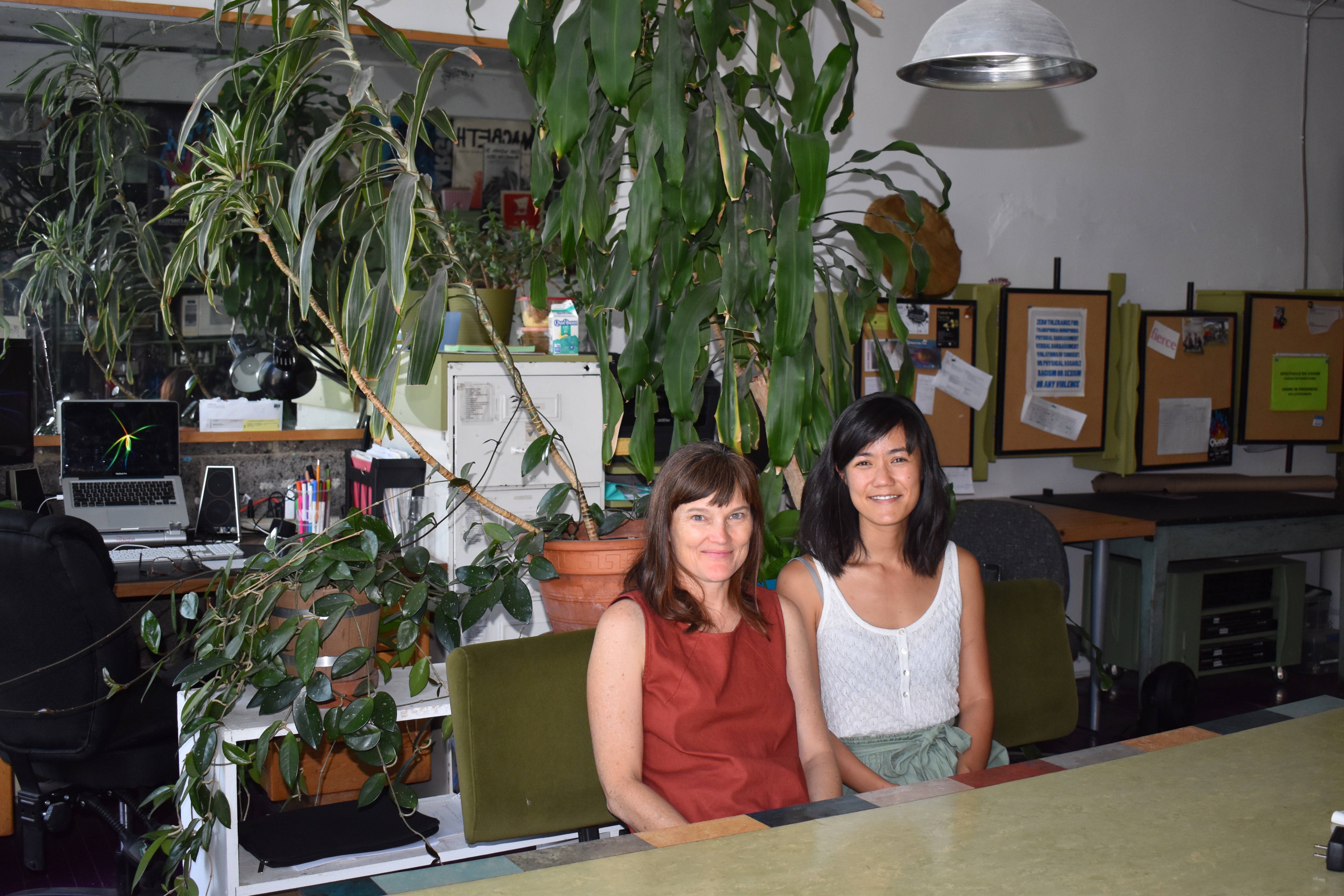 Studio 303 was established in 1989. Could you tell me about what sparked its beginnings, and how the organization evolved in the following years?

MG: Studio 303 was established by three choreographers who wanted a cooperative space in which to train, teach, rehearse and share their work. Two of the choreographers left within the first year, and the third stayed on for five years. I hopped onboard in 1990, working in exchange for classes. The studio grew mostly staffed by self-taught artists. The early days were very intuitive and organic, allowing for a lot of organisational flexibility, with much of the programming done on a first come-first served basis. Once there was a critical mass of artists wanting to teach or perform at Studio 303, we started professionalizing and applying for grants, which required a more curatorial approach and more conscious artistic choices. The focus then was mainly on presenting work. We had the Vernissage-Danse series that lasted twenty years, the Edgy Women festival for twenty-three years, and Noises in the Dark for ten years. Studio 303 has remained constant with its three branches of supporting teaching practice, creative practice, and sharing with the public, though each vein has had its own trajectory.

Grants are a vital part of a non-profit organization’s ability to sustain themselves. How has federal and provincial funding affected the type of work that Studio 303 does?

MG: Funding has a huge impact on programming decisions. The shift from first-come first served to curating work came as a request from funders. The creation of an Inter-arts section at the Canada Council had an important and positive impact on Studio 303’s interdisciplinary programming and on the blossoming of Edgy Women into a festival. Support from Emploi-Québec has allowed us to create an internationally-renowned workshop series.  Losing our Canadian Heritage funding in 2013 for apparently political reasons, created a significant strain on our organization. We had to downsize significantly to survive.

How has Studio 303’s focus changed since the loss of the Canadian Heritage funding?

KSC: It has affected how many shows we present, and what kind of events we do. We used to present work every month, but now we do about six events a year. After that cut, we felt more freedom, as well as a need to express ourselves politically, and so we created Cabaret Tollé, a political performance event that criticized the Harper government. This was a major milestone for us and led to Studio 303 being associated with a stronger political identity.

MG: When you are funded for presenting work, there is a lot more focus on promotion, ticket sales, advertising, and it is difficult for small venues to compete. After losing the Heritage funding, we redirected our energy to the services we offer. We created new types of events, such as our collaboration with the MAI and Theatre La Chapelle for Queer Performance Camp – a safe space to create, explore, perform and network for queer artists. Our focus is more on workshops, residencies, Grant Labs, networking opportunities, creating meaningful relationships with international partners. We still present work, but within process-oriented conceptual events such as REMIX and Metamorphose, which exist to ask questions and reveal the creative process, rather than entertain audiences. We are artist-centred, more than ever.

What kind of services and opportunities does Studio 303 offer that helps to meet the needs of choreographers in Montreal?

MG: Studio 303 is dedicated to creating an inclusive home base for experimental performing artists. Our services are needs-based and inventive. These include one-on-one grant consultations (Grant Labs), really diverse workshops, which are a great place for choreographers to network, share interests, and spark new collaborations or projects.

KSC: We host residencies in our Studio as well as in partner organisations in France, Vermont, and recently Rouyn Noranda. We are one of the only organizations that offer a residency for emerging curators, which is a good entry point for artists interested in that field. We always aim to find gaps in services and resources for the Montreal dance community, and we aim to meet those needs in any way we can. 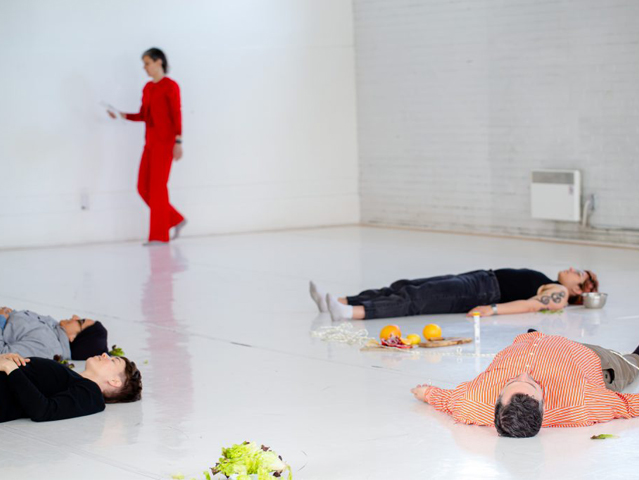 Could you share more about the different networking events that Studio 303 hosts?

MG: Every three years or so, we host an event called SPARK, a five-day multi-venue event for a dozen international professionals with whom Studio 303 and its artists feel affinity. It is an opportunity for international presenters to engage with the practices of local artists, and has led to touring and residency opportunities for many of the artists involved. A lighter offshoot called SPARK Series happens annually in late May during the FTA/OFFTA period to take advantage of the presence of presenters already in the city.

KSC: There is also À Table, a networking event that offers artists the opportunity to sit down with presenters at individual tables for several hours. Artists can initiate, join or eavesdrop on conversations as they wish; this format aims to subvert usual power dynamics that can be prevalent in regular networking events.

MG: Another useful resource in terms of networking, specifically for emerging artists and/or newcomers, is Taking the Leap. It’s an online guide on our website that breaks down the different steps for producing and presenting a show, with a section about the Montreal dance milieu, and includes a curated directory of resources available in the city. It is a useful guide to help artists find community and opportunities, and although dance-centric, it can be very useful to many independent artists working in performance. An updated version will be launched September 19th at Studio 303 alongside some cocktails!

Are there any specific challenges for English-speaking dancers in the Montreal dance community?

MG: Although dance is not a language-based art form, many of our local dance institutions are not completely bilingual, and can feel less accessible to English-speaking and allophone artists. There are also cultural differences, and I’m going to make a big generalization: anglophone and francophone dance artists seem to operate in different aesthetic universes, and this adds to the challenge of finding your place in the local environment; perhaps even more so for allophone artists. The wonderful thing about Montreal though is that when compared to other cities, our institutions and the dance community in general is really collaborative, welcoming and nurturing. And well-funded! Which makes this city a good place to start your career. Montreal has more dance presenters than any other Canadian city; more (and better funded) residency opportunities, more workshops (often subsidized), and more exchanges with European institutions and artists. Dance is very strong in Montreal.

This year marks your 30th anniversary; what kind of events will you be hosting to celebrate?

KSC: Instead of having a big party, we chose to spread some sparkle throughout the year by using the theme of Saturn Return. It is an astrological period of significant growth, with connotations of generational cycles, and looking backwards in order to learn and find inspiration for the future. We are also very excited about an upcoming show that we will be presenting on November 2nd called Impossible REMIX. The premise is essentially for a collective to remix an existing piece that is impossible to remount. Another exciting project is the Curator-in-residence project, which will use Studio 303 archives to produce work.

Do you have any goals and projects in mind for the coming years?

KSC: I work a lot in Asia, and we are working on establishing future collaborations there, but nothing is set in stone yet.

MG: We would like to work towards taking a stronger stand on certain political, environmental, and decolonization issues. Even though this type of advocacy requires a lot of energy, knowledge and resources, it is important to us make strides in those aspects. Another goal is to offer better salaries and hire at least one more staff member. And we’ve recently started offering childcare at our shows!

KSC: The funding cycle usually works in four-year chunks, and right now we’re right at the beginning of that cycle and have many ideas, but they are in early development, so we can’t talk much about them for the moment.

Do you have any pointers for English-speaking choreographers in Quebec?

MG: Come to Studio 303! We offer one-on-one grant advice and many workshops in English.

KSC: It is also good to become a member of the RQD (Regroupement québécois de la danse) as they have great resources like a community calendar, a directory for events being hosted across the province, as well as calls for submissions and job opportunities. Artère is also a great resource with similar job postings and calls for submissions. Always keep applying for things, attend workshops, and performance events. Make yourself known! 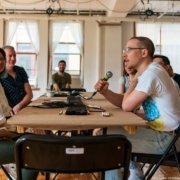 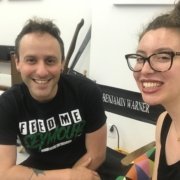 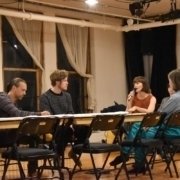 How Can We Repair? Strategies for Resilience from Performative Discussion on “burnout” 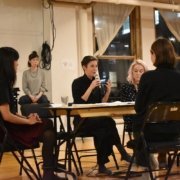 Everything is Work: Summary on Performative Discussion about “burnout” 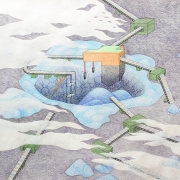 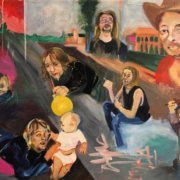 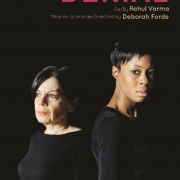