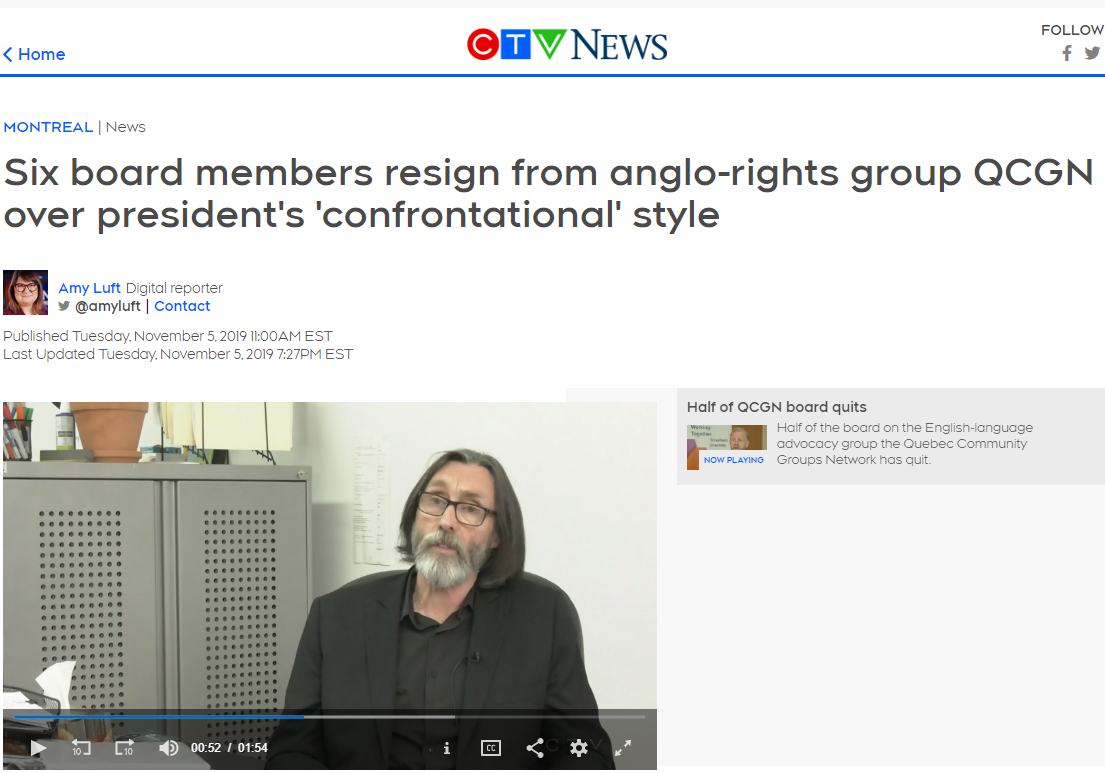 The Quebec Community Groups Network (QCGN) was created 24 years ago as an alternative to Alliance Quebec, which had lost the support of many English-speaking Quebeckers. For more than 20 years, hundreds of staff and volunteers have contributed their expertise, time and passion to build a community network that could defend their interests and give voice to their priorities.

A new QCGN president summer was elected in June 2018. By the end of the summer, QCGN was engaged in a battle with long-time ally, the Community Health and Social Services Network (CHSSN). Community members demanded to know why these pillars of our community were fighting rather than working together. The root cause appeared to be the usual suspects: money and power.

QCGN levelled incendiary accusations against its former partner. An email on November 27, 2018 from QCGN President Geoffrey Chambers to CHSSN President Ron Creary says: “We are aware of the campaign that CHSSN leadership has undertaken to bully and threaten community leadership, who might otherwise not support your activities, into getting in line.”

These accusations were denied by CHSSN, and by all of the community groups allegedly being bullied into submission because they had received some new community development funds.

Next, QCGN’s new president alienated most of QCGN’s own regional associations by accusing them of being manipulated by the newly created Secretariat for Relations with English-Speaking Quebecers. QCGN’s new president claimed to have evidence that the Secretariat and the Coalition Avenir Québec (CAQ) government were manipulating gullible elements of the English-speaking community. Despite repeated requests, not a shred of evidence has been produced.

Over the past year, the situation has deteriorated. To protest QCGN leadership’s indiscriminate hostility against perceived enemies and adversaries, as well as former friends and allies, a third of QCGN’s voting members have resigned (including ELAN, the Quebec Writers’ Federation and the Quebec Drama Federation), along with two former honorary life members of QCGN, and half of QCGN’s board of directors. The new president of QCGN continues to blame improbable conspiracies and nefarious political forces for these deepening divisions in the community. At no time has the president acknowledged the possibility that any part of the problem has anything to do with him. And that is a serious problem.

Everything is Work: Summary on Performative Discussion about “burnout...
Scroll to top