During May’s Asian Heritage Month, mandated social distancing and regulations due to Covid-19 continue, with artists and companies of all disciplines dealing with cancellations, closures, and shut downs. Artists have been forced to adapt and find innovative ways of supporting each other and continuing their creative work during a time of social and personal quandaries. The theme of Asian Heritage Month 2020 is Asian Canadians: United in Diversity and ELAN reached out to artists in Quebec to discuss impact on work, collaboration, creativity and well-being. 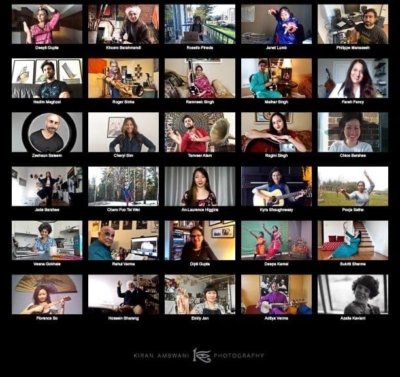 A visual shot of Kiran Ambwani’s work in progress.

Indo-Canadian visual story-teller, documentary photographer, and educator, Kiran is a Board Member of Festival Accès Asie. With social distancing in place, Kiran Ambwani is working via online platforms to create portraits of artists in quarantine. “Everyone is finding ways to adapt to the situation.” 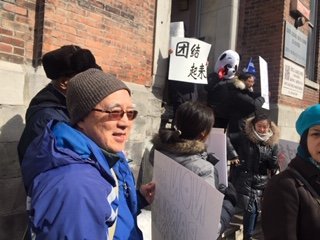 Due to increase in xenophobia, William Ging Wee Dere, the author of Being Chinese in Canada: The Struggle for Identity, Redress and Belonging, has been working with the Progressive Chinese of Quebec (PCQ) and ACT2EndRacism. “Anti-Asian racism has always been in Quebec society but it has come to the fore in the last few months.”  William asserted, “I feel we need to organize ourselves to oppose and fight back against these attacks against Asian people.” 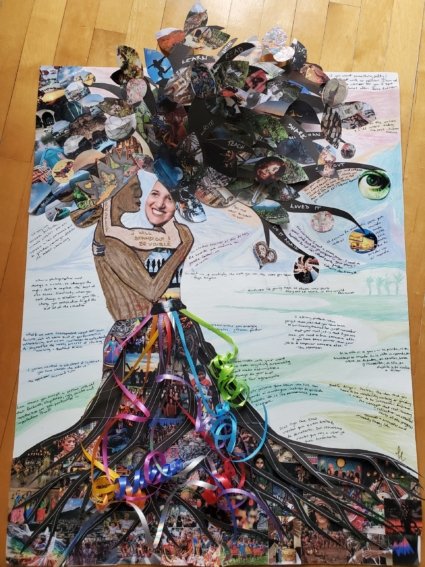 Farah Fancy‘s 2020 Vision Board – planning ahead for the future!

An interdisciplinary artist who fuses the arts, therapeutic techniques, and ethnography, Farah incorporates “global Indigenous models of thinking which we need to celebrate, in solidarity with the Indigenous.” Farah has been designing the National Asian Canadian Heritage Symposium, presented by Festival Accès Asie be held online September 10-13, 2020. 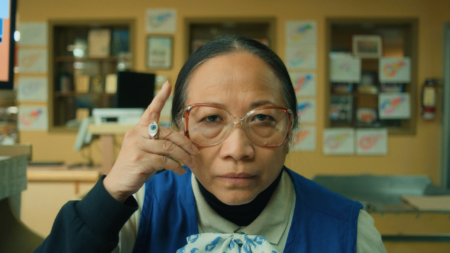 Recipient of the Filipino-Canadian Artist Award; Carolyn was in tech week at Tarragon Theatre when live venues went dark, and her band’s residency at House of Jazz halted. Currently working from home in strict self-isolation because of chronic asthma. “Although I’m lucky to have work, I find myself distracted. How will the industry change? I’ve waded against the currents of performing life because of my Asian heritage. My challenge is to stay focused in the moment.” 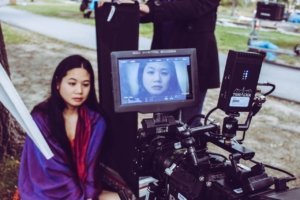 Actor and singer, Laura is using her native Vietnamese with project Diversité Artistique Montréal and Montreal Public Health; an initiative to improve the mental and emotional health of artists during the pandemic. In response to racism, Laura created Groupe d’Entraide contre le racisme envers les asiatiques au Québec, which received support from the Centre for Research-Action on Race Relations. “It is our Quebec identity that is being injured and it’s hurtful.” 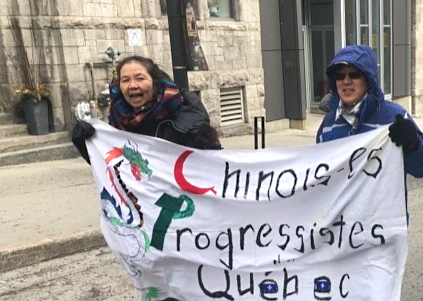 Janet Lumb is a third-generation Chinese Canadian, artist, sax player, community organize working with Progressive Chinese Quebecers against racism since the start of the coronavirus crisis, while still playing and making music. This past weekend, Janet was at Jeanne-Mance Park, playing her sax (at the required distance). Janet enthused over the power of music “Listening is therapeutic, it’s literally a physical connection!” she said of her impromptu concert, “music does that!” 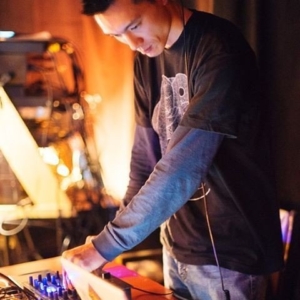 Musician, DJ and community media activist: Parker Mah believes that “art is inherently political.”  Parker was slated to be the DJ in residence for the FTA this May. All of his collaborations and residences were postponed or cancelled. Currently he is working on À 2 mètres, an online citizen media initiative for Montreal-North. “As an Asian, it’s a priority, in the face of rampant racism, to fight not just against anti-Asian racism, but also anti-Black sentiment as well. This virus is disproportionately affecting communities of colour.” 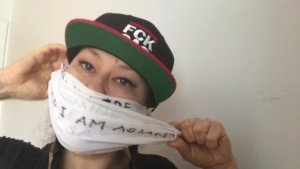 Julie Tamiko Manning with her hand made masks, self portrait.

Julie Tamiko Manning, a Japanese Canadian and British playwright and actor, has been working on mini-videos for the Knowledge Sharing Symposium, as well as a site-specific project with Feminist Performance Creation. She is writing her play Mizushobai, and continues to mentor young artists online.  Despite her productivity Julie demurred,  “Creativity has taken a back seat to ‘Getting Through The Day’. I have to spend time on the things that bring me joy or else I will never make it through isolation.” 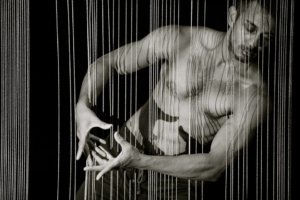 Winnipeg born with roots in the Philippines & Guyana, dancer Mark Sawh Medrano moved to Montreal, “a mecca of art in North America”.  Mark dances with a range of companies including recently, Animals of Distinction. “Because we’re so used to touch and physicality, and spending our energy, quarantining is extremely hard.” Waiting to be permitted to dance with others in the same room, Mark will start innovative online rehearsals for new creations starting in June. 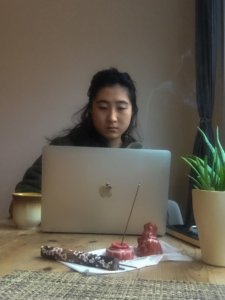 Kyung Seo Min is a Korean born writer, performer, and dancer whose work bridges traditional Asian performance philosophies and Western theatre practices. “Covid-19 has given me more time to reflect upon what these stories are telling me and what I want to say. So all is not lost.” One challenge as an artist of Asian descent has been “the scapegoating and hatred towards my skin colour has worn down what little is left of my position in Canadian society. We fight to be recognized but now we are mis-cognized.” 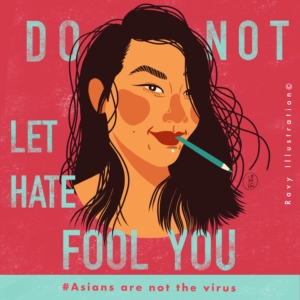 Ravy launched an online illustration campaign entitled “Asians Are Not the Virus”.  A Canadian born of Cambodian-Chinese parents, Ravy is an illustrator whose work focuses on representations and cultural identities. Currently, Ravy is working on a graphic novel about her family’s migration. “The racism increased by Covid-19 has drained all my energy,” Ravy admitted. “My new way to fight for racial justice is now to fully embrace my Asian identity by intentionally celebrating my culture in my art.” 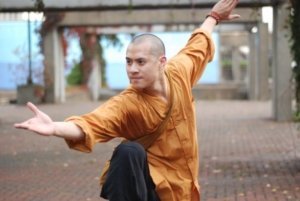 Fred, an actor, stuntman, and 32nd generation Shaolin disciple, halted his web series pilot in mid-March. In isolation he’s writing a feature and doing pre-production. “My creative process is usually bouncing ideas off my stunt team and seeing what jokes or concepts work visually before I write a script. With social distancing, I don’t have that energy to work with.” Once the distancing barrier is lifted, Fred will be “running towards my stunt team and drop-kicking each and everyone of them! Safely of course.” 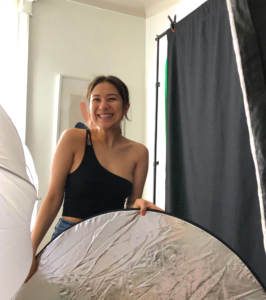 Katharine King So, in her self-made home studio

Katharine King So is an actor, filmmaker and advocate for LGBTQIA+, her latest projects were Bloodthirsty, an Indie film, and CTV’s Transplant. She was auditioning in LA for Pilot Season when everything was cancelled. Katherine, whose parents come from Newfoundland and Hong Kong, has adjusted. “Mostly I’ve put my writers hat back on and have been working on TV & film pitches during quarantine, fleshing out new ideas.” 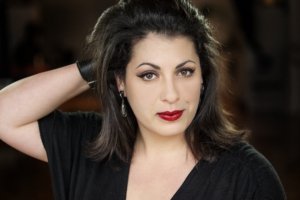 Montreal based actress, writer and director of Lebanese, Syrian and Egyptian descent, Natalie was recently seen in Antigone (Best Canadian Film at Tiff) and soon in La face cachée du Baklava and she’s the voice of Mme Coucou in the remake of Passe Partout. “My goal during confinement, aside from spring cleaning, was to be pro-active and write. But, the uncertainty has sapped my energy. We will never go back to pre-Covid-19 and we don’t know what post-Covid-19 holds. Oh, and spring-cleaning is yet to be done!” 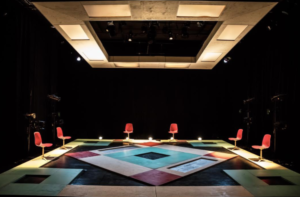 Artistic director Rahul co-founded Teesri Duniya Theatre, a multicultural company. Counter Offence, written and directed by Rahul, ran for only two days before it was shutdown. Rahul’s been working from home on Leave out Racism. “The performances need to be in person because we want face-to-face interaction… the dynamics are different”. Teesri Duniya Theatre is adapting to the digital milieu. Their Fireworks Playwrights’ Program will feature five writers of colour on Zoom on May 21st.

These are only a handful of the many talented Asian Artists in Quebec whose work ELAN is highlighting.  At this surreal juncture, so much of life and art has been suspended in a holding pattern, with uncertainty causing disequilibrium and unease. Artists are responding to difficulties in developing their own artistic practice, as well as to external pressures in their communities. Asian artists are using their voices and their art to empower and assert values that are vital on societal and personal levels. Despite all of the challenges, they continue to adapt, innovate, reflect, exchange, influence, collaborate and create. This is most definitely something to celebrate. Happy Asian Heritage Month! 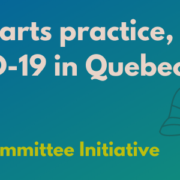 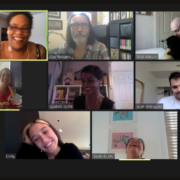